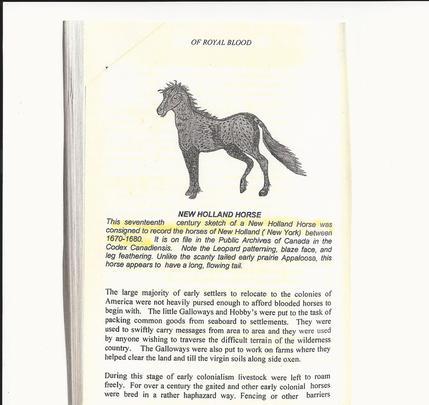 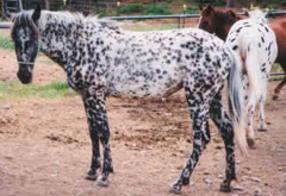 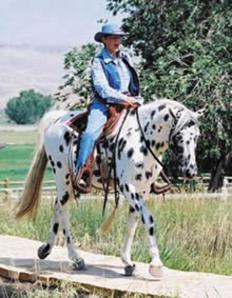 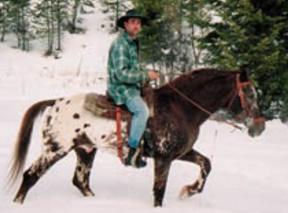 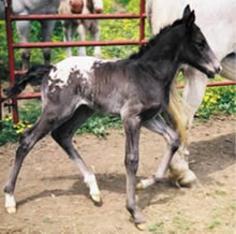 There is factual evidence of Leopard horses who were introduced to Canada from France in 1665 that depicts the first horse sent into Canada by King Louis XLV. The sketches below are taken from Dyan Westvang's book, "Of Royal Blood, The Missouri Fox Trotter. These are the Canadian Colonial Leopard horses which evolved into the Canadian pacing breed and was one of the sources for the Leopard Appaloosas. 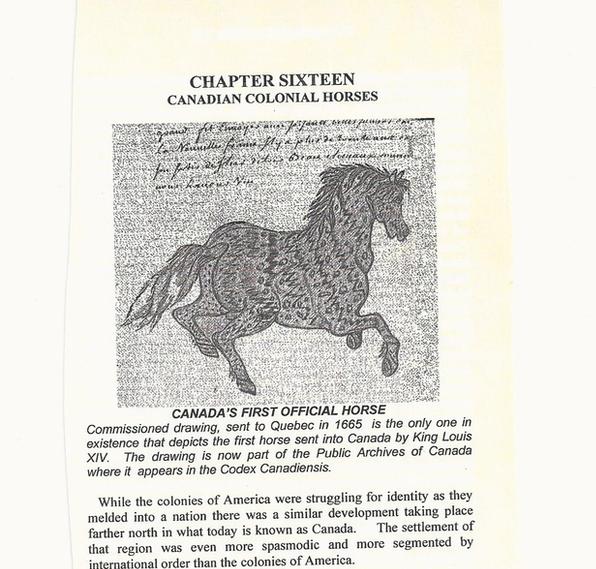 Beginnings IN THE BEGINNING, THE APHC NEEDED TO build up the number of horses and so approved out-crossing to other recognized registered breeds, such as the Morgan, Saddlebred, Tennessee Walker, Standardbred, Arabian, Quarter Horse, and Thoroughbred. To be registered as an Appaloosa the only criteria required were that the horse have the color (a recognizable coat pattern) and characteristics (molted skin, white sclera, stripped hooves) of the Appaloosa horse.

Many of the early breeders bred Appaloosa to Appaloosa, and did not outcross. Because of the scarcity of Appaloosas, the ApHC allowed outcrossing to the above breeds until 1970. In the mid 1970s the books were closed to all outside breeding except to Arabians, Quarter Horses, and Thoroughbreds, and that continues to this day. This breed has been a non-gaited breed and the only accepted gaits in ApHC sanctioned horse shows are walk, trot, and lope.

includes all four-beat gaits, which are on a spectrum from diagonal to lateral. This includes the Foxtrot, Stepping pace, Rack, Running Walk, Broken Trot, Flat-footed Walk, and anything in between.

Where does the gait come from? It comes from many sources. From the inception of the Club there have always been gaited Appaloosas though this trait has not been recognized or encouraged by the ApHC. Some speculate that the gait comes from Spanish influence from the original horses brought over from Spain. The Spanish horses are considered a precursor to gait in many American-developed gaited breeds. More recent infusions of gait stem from when the club was opened up to breeding to non-Appaloosa gaited breeds. However, it seems the Foundation Appaloosa demonstrates the most gait of all the Appaloosa horses.

A FPD (Foundation Pedigree Designation) program was started in the last few years within the Appaloosa Horse Club. This program measures the "purity" of the Appaloosa pedigree. The goal is to create eight generations of "pure" (Appaloosa-to-Appaloosa) breeding. There are now FPD-sanctioned horse show classes for Foundation Appaloosas.

By breeding Appaloosa to Appaloosa the Foundation breeders have strengthened the gait through these Foundation lines. They are therefore creating more and more gaited Appaloosa Indian Shufflers. The belief of the FAB is that the Appaloosa is more than just a color breed, but also a blood breed. Using the old Foundation Bloodlines produces a horse that is unique and colorful, and looks like no other breed.

The Appaloosa Horse News addressed the Indian Shuffle gait in an article in 1978: "Rough country cowmen ... are quick to point out that his natural traveling gait, the Indian shuffle, a seemingly tireless running walk..."

THERE HAVE BEEN A LOT OF OLD-TIME FOUNDATION APPALOOSAS THAT HAVE shuffled. EL MOROCCO, owned by Gene Autry, was considered the most famous Appaloosa in 1954. Used for Autry's personal appearances, he was a black leopard Indian Shuffler. He was reportedly out of a Standardbred black mare. The famous Toby show horses, Toby I and II, were gaited Indian Shufflers, and Had an animated, magnetic presence. MANES BLUE EAGLE was an Indian Shuffler and produced many gaited Appaloosas in the '60s and '70s. Lee Mane was a Foundation breeder who loved smooth moving and fast ground covering horses, and purposely bred for these traits.
ApHC Recognition

THE APHC ALLOWS ITS members the freedom to produce Foundation Indian Shufflers though they, as of yet, do not recognize, or value, the characteristics of a gaited horse.

There are a number of ApHC sanctioned trail rides, including the famous 100-mile Chief Joseph Trail ride which occurs every July and follows the path that Chief Joseph took in an effort to escape the cavalry. The ApHC also sanctions several competitive Trail and Endurance rides, and gaited Appaloosa horses have excelled in these events.

The history of the Appaloosa horse is as colorful as they are.

The Appaloosa is a colorful, all around versatile breed with a storied past rich in history.

Developed in the Pacific Northwest, the Appaloosa has its roots in the Nez Perce Indians, who bred for color, intelligence and agility. This horse enabled the Nez Perce to elude the U.S. Calvary beyond all Army expectations. Its colorful spots and appearance are synonymous with Indian culture.

In 1975 the Appaloosa was named the state horse of Idaho.

Appaloosas are known for solid and sturdy bone structure, good, hard feet and legs, and a hardy constitution. Appaloosas have been free of many of the physical problems of some other breeds. Foundation breeders have kept the unique charm and character of the Appaloosa by minimizing out-crossing to other breeds.

The Appaloosa horse has a hardy and gentle temperament, ranges in size from 14.2 to 16 hands and comes in many color patterns. These patterns range from roans, snowflakes and blankets, to spots over the whole body (leopards).

Gaited Appaloosas are making a comeback due to the dedication of Foundation Appaloosa breeders and the changing market place, which is valuing recreational riding.

Gaited Foundation Appaloosa:
So old they are new again

Gaitedness in the Appaloosa:  A Tribute to the Past

The Appaloosa:  The Total Package

Shuffling Along -With Indian Shufflers

Why not an Ulrich Horse?

An Untapped Market:  The Gaited Appaloosa