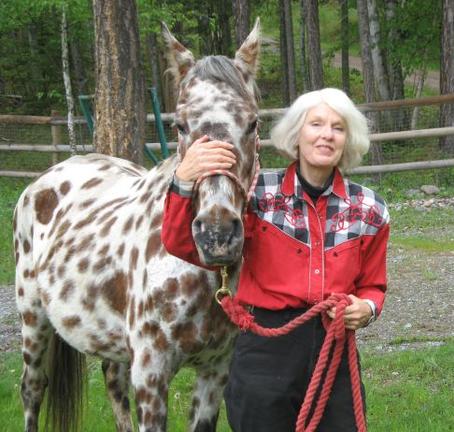 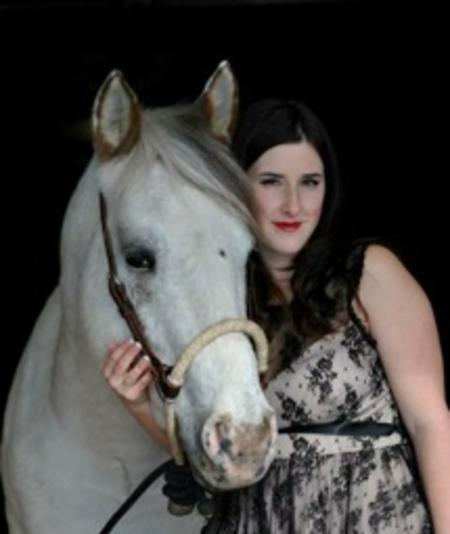 I just love the Ulrich horses.  It's in the genes and the body structure of these horses to be docile, quiet, sensible trail horses. A very few still have the gifted Indian Shuffle 4-beat gait.  But more important to me is to have a safe horse.  These horses are not flighty but are well grounded and slow to react to upsets around them.  They have a built in self-confidence such that you can take them out solo on a trail ride. They are unusually high in the pecking order.  It is my goal to resurrect more of the Ulrich blood line again in my herd.

Don Ulrich bought leopard bred mares from the Timberline Ranch in Broadview, MT and the very last Navajos Candy colt, and he named him Ulrich Many Coups. Don's famous advertising jingles were "Appaloosa to Appaloosa, and the best to the best."  However he realized to continue with the Leopard legacy he needed to expand and enlarge the leopard gene pool dynasty by bringing in other famous leopard lines. Don visited Robert Taylor from Wolf Point, MT and bought Rakush, Ben Buzz and a Jims Ben Lowe leopard mare.  He also bought from Lee Warne's ranch in South Dakota, Sully's Butterfly which is the  Sundance 500 line. These new leopard blood lines plus the Timberline leopard lines, the Morgan leopard, the Simcoe Sarcee, and of course the Navajo Candy line, and a few other not well known leopard lines which all made up his breeding program.
Mr. Ulrich had noticed a little shuffle gait in a few of his Leopard horses and wanted to develop this trait in his herd.  He died died before he ever figured out where the gait came from or how he could develop it in his horses. Pete Smith, Mr. Ulrich's trainer, told me he noticed this gait trait in Ulrich's Jungle Matt.From my research it was Morgan's Jungle Kitty that brought the gait trait into some of the horses in Ulrich's herd.

Interesting pedigree   Morgan's Jungle Kitty was by Sikanni Chief by Ranger Snip a registered Morgan. Many Morgans were gaited in the past. Sikanni Chief's dam was Kamiac Princess out of Kamiak Trixie, a full sister to Toby I, which brings in the Toby gaited genes.  Her bottom side was Morgan leopard. Also I contacted Carol Mulder who is an authority and historian on Arabians.  She told me that Alyf, a registered Arabian, was a strong ambler, and this stallion is prominent in Morgan Jungle Kity's pedigree. She said Alyf could gait without effort and could stay in gait beside horses doing a full gallop. This stallion was personally ridden by Carol at the famous Kellog ranch in Pomona, California. So you can see this gaited trait could have come from any one of these three sources or a combination thereof.

I believe in form and function.  Horses with broad faces, square muzzles, straight profiles, stocky body builds, lob ears, and almond shaped eyes, all translate to a calm, dependable temperament.  The traits above all fit the Ulrich horses to a "T".

Trail riding is the number one past time of most horse owners, and is the trend in the equine market.  Some of the pictures shown here are pushing and expanding what a Foundation Ulrich Appaloosa can do.​ To learn more about the Ulrich horses reference my article, "Why not an Ulrich Horse?" 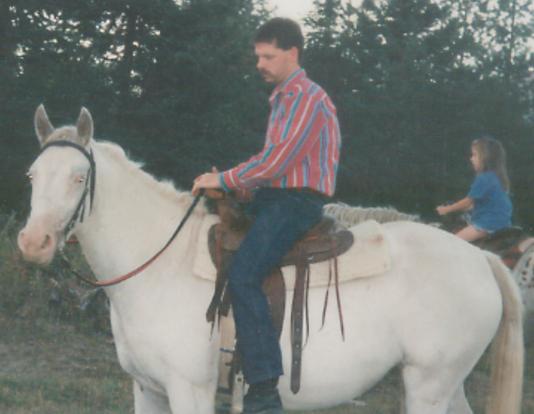 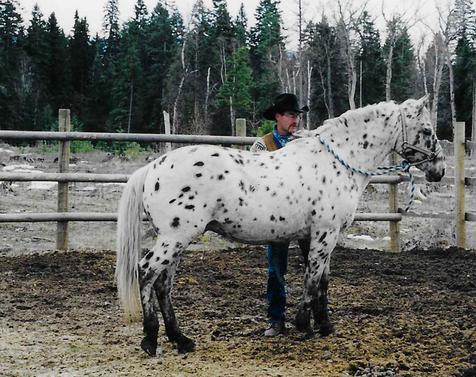 Ulrich Kingpin was gifted to me by Dan Ulm.  I have still have two of his offspring:  Neemeepoos Wind Song, and Neemeepoos Natahki.  Kingpin lived up to his kind and gentle Ulrich disposition.  Easy to handle, and always calm and quiet.  I gifted him to Edie Street, a foundation breeder, so that others could benefit from his bloodlines. 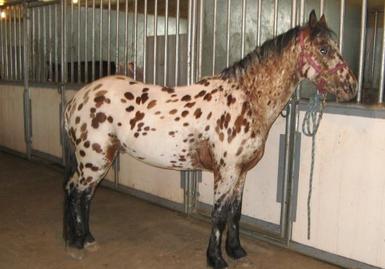 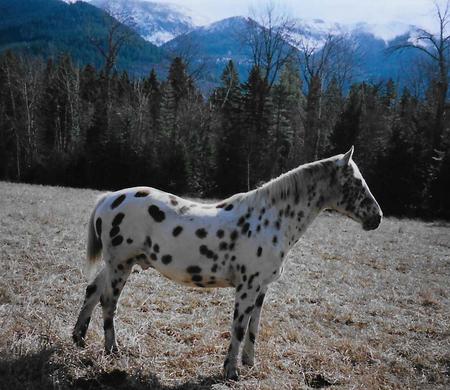 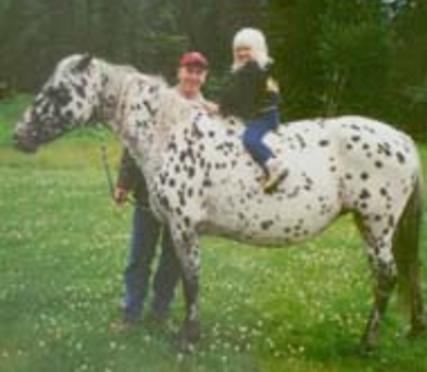 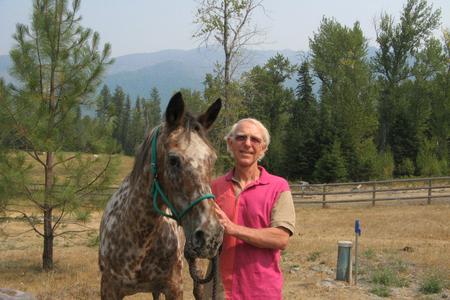 Ulrich Breed Stallion.  He did it all!  He was a lesson horse for beginners, won ribbons in western pleasure and trail.  Kathy Hanson showed him in parades, and he was a skijoring champion, and was even on TV.  Kind, kind, kind. Kathy Hanson bought him and maximized his talents. He is also the sire of some of my mares, Charakotah and Shuffle Dance.

ULRICH KITTEN III, DECEASED, GAITED, AND PRODUCED OUR GAITED APPALOOSAS, AND WAS THE CORE MARE FOR OUR GAITED BREEDING PROGRAM.  HER MOST FAMOUS GAITED GRANDSON IS NEEMEEPOOS REDNECK 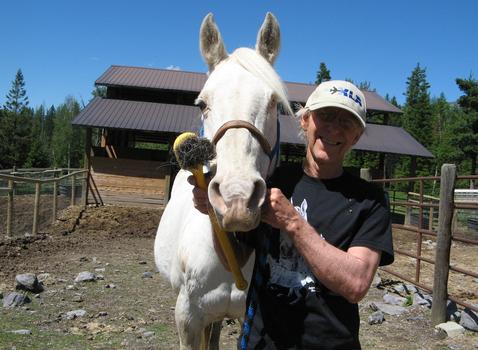 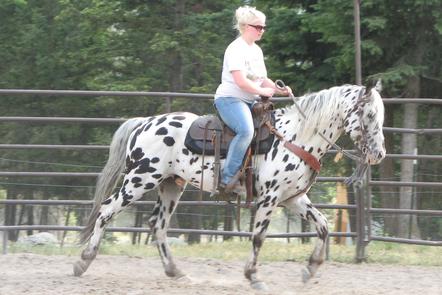 Fancy was never broke to ride as I got her when she was older, but she was so sweet and took care of the weaned foals.  She produced the beautiful leopard colt,Neemeepoos Chakotah Sioux (below), who is the sire of our Glacier Kat stallion.

My most favorite riding pal and the daughter of my beloved Kitten III. She was gaited and half of her foals inherited the gaited gene.  She was a sweetheart of a horse, so gentle, kind, and nuturing.  She raised several of my orphaned foals, so accepting.  She will be greatly missed, and I think of her often. We have her son, Glacier Kat, Neemepoos Cherakotah, and her oldest daughter WA Ulrich Cowgirl.

Sweet Sioux is aptly named, as both she and Fancy Kat are sweet, docile mares.  She was the perfect trail horse as she exudes self-reliance and was the horse we put visitors and beginners on.  She knew who she was and although responsive to a riders cues she knew when she had enough and would take charge when she had enough! 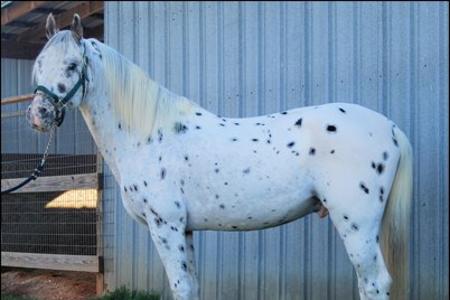 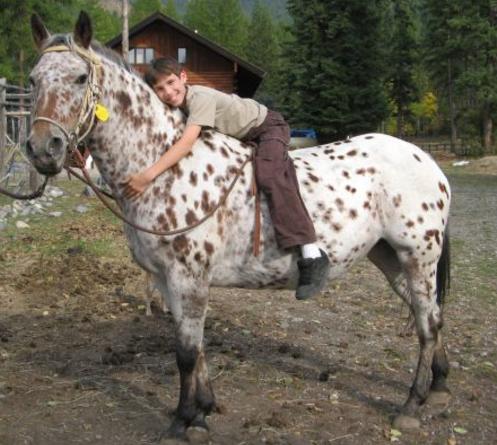 Amazing disposition, so calm and personable 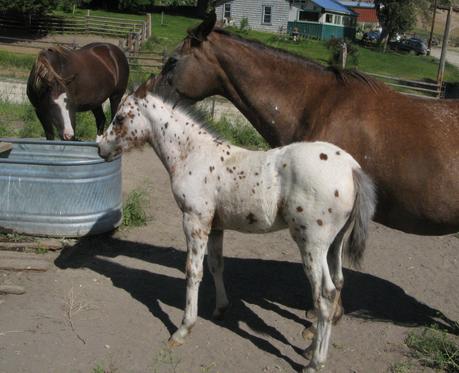 These pictures say it all.  Tonka Sioux was trained by her owner, Krista, and does it all.  He has won at shows, been in parades; you name it, he's done it! 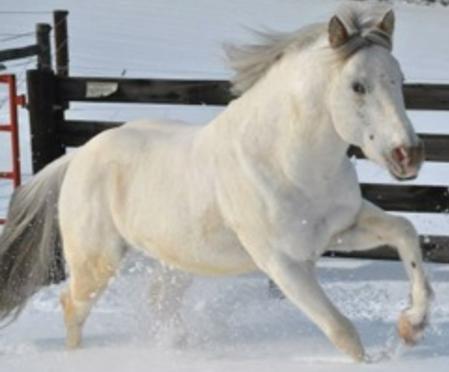 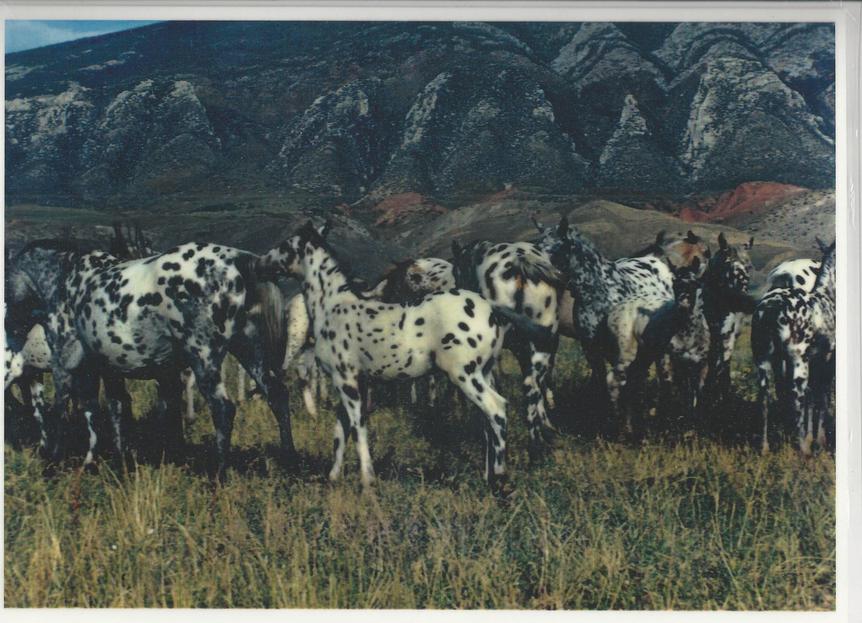 Ulrich Kavalier, a gaited son of my gaited Ulrich Kitten III.  Here is a YouTube video of Kavilier made just before I had to put this beautiful gaited stallion down. His gaitedness (fox trot gait) has been handed down to Redneck through Urich Kitten III. This horse was in his late 20's, had foundered two times, had cancer, and had to be put down. Pictures of Kavalier will be forthcoming but enjoy the video. 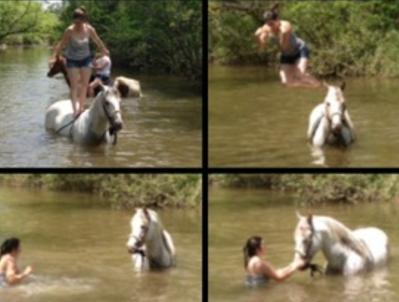 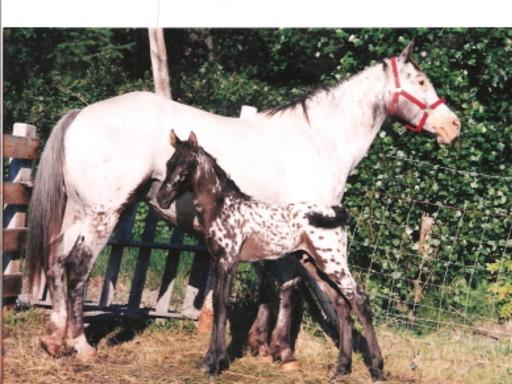 NeemeepoosChapakqua 5/23/2000 to 6/6/2018; Deceased
Tri-colored leopard stallion by Pratt's Toby Secret out of Ulrich Windsong.  Has produced beautiful offspring. I still have Neemeepoos Tetonia by him.