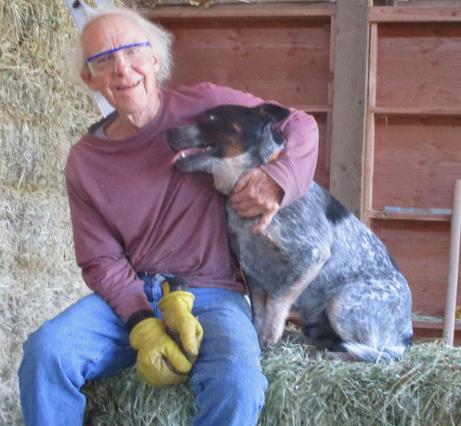 Carrying on Redneck's legacy.  Gaited on both sides of his pedigree with lots of gaited ancestry!  He has all the great gaited ancestors (4X's El Morroco, Maine's Blue Eagle, Quinto Joe, Ulrich Kitten III, the Toby's, and Scripter bloodlines.  All in one package.

​Here is a video on Rain-fire

​FLASH:  GENETIC TESTING CONFIRMS HE IS A GAITED STALLION (CA GAITED) HAVING ONE GAITED GENE WHIC MEANS IF BRED TO A NON-GAITED HORSE, 50% OF THE FOALS WILL BE GAITED
Will be standing at stud at Monroe Farms   (www.monroefarmsllc.com)

George worked as executive secretary of the Appaloosa Horse Club I Moscow, Idaho for 31 years.  He started the "Appaloosa News" (now Appaloosa Journal).  He was the driving force of the ApHC and was very loyal and commited to promoting the Appaloosa horse.  I had the pleasure of meeting with him several times before his death in 2011, and he and his wife Iola, graciously shared their resevoir of pictures and history of the Appaloosa horse with me.  He left a real legacy by creating ther Appaloosa Museum in Moscow. The history alone is so precious and gives you a view of the evolution of the Appaloosa horse.

In my conversations with George Hatley, he said that the Leopards were a totally different strain of Appaloosa he was not familiar with.  He said they were not a "Nez Perce" type of horse.  Almon Manes said the same thing.  These original Leopard horses were a more heavy, bigger boned horse with low withers, wide barreled and a coarser appearance.  I remember many years asking the Brendabella Farms, I think her name was Charloette Sheeley, why she bred her Leopards to Thoroughbreds.  She said to sproud withers and breed for a more refined look.

Below, are some of Redneck's gaited offspring

The Montana Leopards were started here in Montana around the 1950's in Broadview, Montana by Ralph and Helen Brown.They were known as the Leopard capital of the world at their Timberline Ranch. They purposely bred Leopard to Leopard and kept that beautiful legacy of Montana Leopard horses going. Later on they had a big dispersal sale, and Don Ulrich bought and took a big chunk of these leopards to Wyoming and kept the intense leopard to leopard breeding. They became known as the Ulrich Leopard horses and kept the leopard coloration. We bought a couple of Ulrich leopards in 1987, and bought quite a fewl more in a dispersal sale after Mr. Ulrich died in 1992. See my article in the Articles/Link above entitled "My story:  Traveling Appaloosas."

My program continues on with my granddaughters, Amanda Bryant, and Lacey Schenk, and I have sent most of my breeding and riding horses to their ranch, Monroe Farms, in Deer Park, Washington.  See their webpage, https://monroefarmsllc.com/boarding​. Both of these girls are experienced horse women as they were brought up with our Ulrich horses and showed them at horse shows from an early age.  Lacey is a veterinarian who can AI (artifical insemination) horses.  Amanda is an experienced endurance rider and hosts endurance rides.  Both will be showing, trail riding, and standing at stud several of our Ulrich bred stallions.  Rain Fire will also compete as an endurance horse as he is gaited and has natural impulsion and will be standing at stud.

FLASH, the results are just in:  REDNECK was tested at the Animal Genetics Lab and found to be homozygous gaited.  This means he carries two gaited genes and all of his foals will therefore be gaited.  He is considered an AA horse which is the most gaited a horse can be! Now there is no need for Appaloosa buyer's to go outside the ApHC breed for a gaited Appaloosa.  Cheryl Palmer and Susan Boyd have partenered up to breed and develop prize gaited Foundation Appaloosas.  We have developed a strong gaited gene pool of outstanding and colorful leopard horses.

Ulrich Kitten III upon whom my whole gaited program is based..

Redneck, a fully gaited few spot leopard stallion that is producing loud colored outstanding gaited progeny.  Redneck is making a difference, and is bringing back the sought after gaited Appaloosa.  He is a stocky, strong built horse with gait.  Redneck has a quiet disposition, is a quick learner, who has proven to be a potent producer.

Many years ago when the ApHC was in its infancy, Lee and Almon Manes became known as Foundation Appaloosa breeders that produced the fast ground covering gaits, the Indian Shufflers.  Lee Manes needed strong built horses that could handle difficult terrain.  He was an outfitter and respected horseman.  Our breeding program centers on complete versatility, true shufflers, and Redneck represents this history, and is a product of Lee Manes vision.  Redneck is one of a kind, the last of an era.  he's got the body of a stock horse, and the gait of a true shuffler.  Redneck is the Total Package - 100% color producer, fully gaited natural shuffler, and hardy conformation.  He brings back an era that was lost!!!

My passion and purpose has been to develop a gaited Appaloosa program.  I have teamed up with Susan Boyd (www.ifwisheswerehorsesllc.com, 870-586-9229 so that we can jointly continue this program for people who desire gaited and comfort horses.  These horses can do anything a nongaited horse can do with less stress for both horse and rider.  A gaited horse always has one hoof on the ground at all times and this is what gives a smooth and comfortable ride.

Prestigious Foundation Leopard family horses gifted with mellow dispositions and a natural gait.  We are on a program to consistently produce and preserve the Indian Shuffler (ApHC), a smooth, fast and efficient mode of travel.  We like to call them "comfort horses", both easy on the horse and rider.

These spotted gaited horses are colorful and professionally trained.  The degree of gaitedness varies from horse to horse and in some it takes time and training to bring it out.  Gait conformation and gait genetics go together.  We are a work in progress. There are two sources available right now which will do a gaited gene evaluation.  One is Animal Genetics Laboratory in Florida and they will do a DNA gait analysis for $125 and send you the results within 3 days.  Click on their website, www.animalgenetic.us,